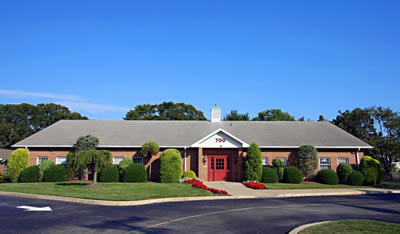 Founded in memory of comedienne Gilda Radner, Gilda's Club South Jersey opened its signature red door in the fall of 2002 thanks to the efforts and seed funding from the Ruth Newman Shapiro Cancer and Heart Fund (RNS). Our first Clubhouse, located on North Carolina Avenue in Atlantic City was the RNS Show House, which RNS donated to us and we stayed in for a few years, but we soon outgrew the space.

In 2009, the organization secured our down payment for our permanent "home" at 700 New Road in Linwood, thanks to the leadership of our Board and a multi-year pledge from coin canister collections, generously donated to us by Wawa Charities. Later that year, Gilda's Clubs and Wellness Communities nationwide merged to become one organization, The Cancer Support Community.

In 2010, our first satellite opened at the AtlantiCare Cancer Care Institute in Egg Harbor Township. Members can attend support groups or activities at either location-whichever is more convenient. Since then, GCSJ has expanded our reach through offsite programming in Cape May Court House and western counties, to better serve our community. Most recently we have opened satellite locations at the Inspira Cancer Center in Mullica Hill and the Inspira Cancer Center in Vineland.

Our most significant area of program expansion is "Noogieland" -- a special place in the clubhouse just for children 4-12 years old that have been impacted by cancer. Children and their families come together for "Noogie Night" activities. Children participate in an age appropriate therapeutic program while their parents concurrently attend support groups to share their thoughts and concerns. "Noogie-Nights" are held each Tuesday and Thursday evening and include homework help. This allows the whole family to come out and participate in appropriate support activities during the week. In January 2011, the Club launched a "Tween Group" for children ages 12 through 14 to meet the particular needs of that age group.

Gilda's Club South Jersey is a 501(c)3 non-profit organization that receives no federal, state, or municipal funding and relies on the generosity of the public, corporate and foundation support, and events to provide this comprehensive program to our community. To learn more about Gilda's Club South Jersey, or to make a donation to continue this very special program, call 609-926-2699.